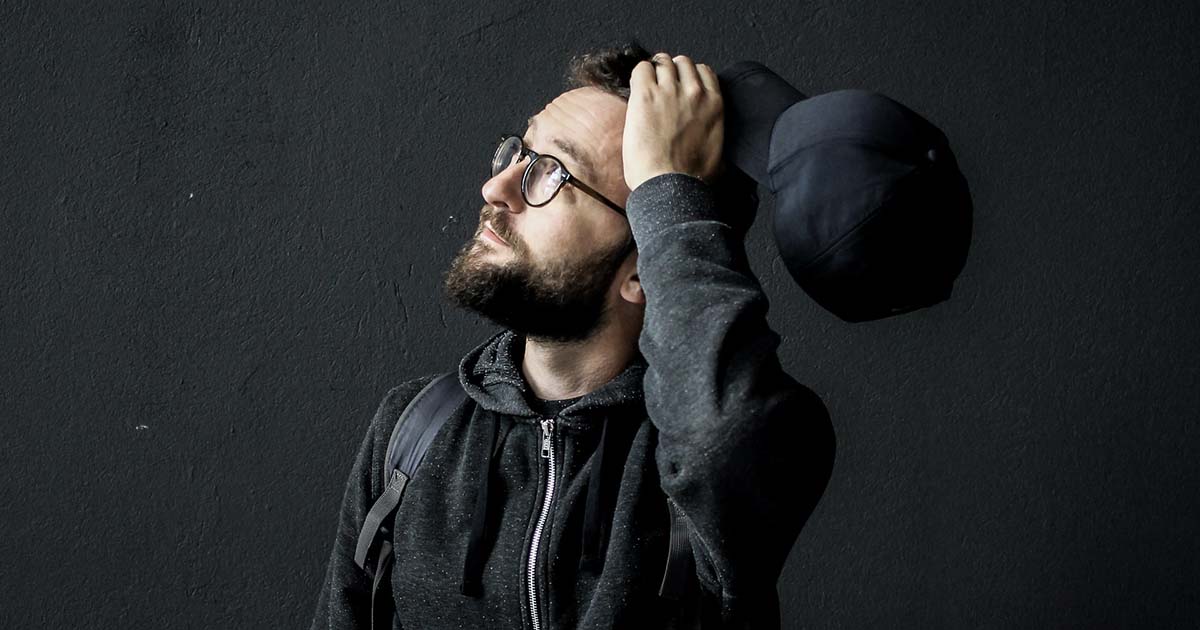 The road to better outcomes starts with understanding some of the problems we have with decision making.
January 15, 2021

It's said that one day's edition of the The New York Times has more content in it than someone in 18th Century would consume in their lifetime.

Compare the world you live in now with theirs - if they wanted to find out what was going on in the world, they had maybe one or two sources to tell them.

In comparison, we have hundreds, even thousands. Every minute of every day, we are faced with a torrent of information such as sales messaging, news stories, think pieces, research and opinions.

How do we make sense of the deluge? It starts with understanding some of the problems we have with decision making.

There's a great story, told by the author Rolf Dobelli: imagine a million monkeys, who are going to predict whether the stock market will rise or fall next week? They have two buttons with which to make their predictions - one for rise, one for fall.

After a week, it turns out that roughly half the monkeys got it wrong - they're monkeys after all. But hey, the other half got it right.

All the monkeys that got it wrong, they get sent home. And the remaining monkeys get to predict again, will the stock market rise or fall? They press their buttons and wait.

This keeps going for weeks and weeks, until after about 20 weeks, one monkey remains. This is the monkey who has consistently got it right, week after week after week. He’s outperformed every human stock picker on the planet.

Now, this monkey gets presented to the world as The Success Monkey. He predicted right, for 20 weeks in a row! He gets profiled in the media, who write articles about him. They talk to his family, and his relatives, and even his zookeeper. What was he like? What made him into the success he is today?

Websites publish blog posts about what successful monkeys do first thing in the morning. Does he eat one banana or three for breakfast? People even write books about him, like "The Seven Habits of Highly Effective Monkeys".

This story is good fun - but it's also a great way of illustrating a type of cognitive bias called Outcome Bias. This is where people see the outcome, but they don't see the process by which it came about. It can cause us to make decisions based on only the outcome of an event - even if the outcome is determined by chance.

There are over a hundred different kinds of cognitive bias, far too many to cover in one blog post. The point is, it can be really difficult to make accurate decisions.

There are two ways we can go with this - we can drown in the deluge, or we can use it to our advantage to help us achieve a balanced, objective approach.

Skills For The Future

A recent study published by the World Economic Forum revealed the top most in-demand skills for the 2025 workplace. Critical thinking and problem-solving top the list of skills employers believe will grow in prominence in the next five years, and 50% of all employees will need reskilling by 2025.

Easy-to-use tools to help you define and refine your strategy, and get your leadership team aligned.
Learn more 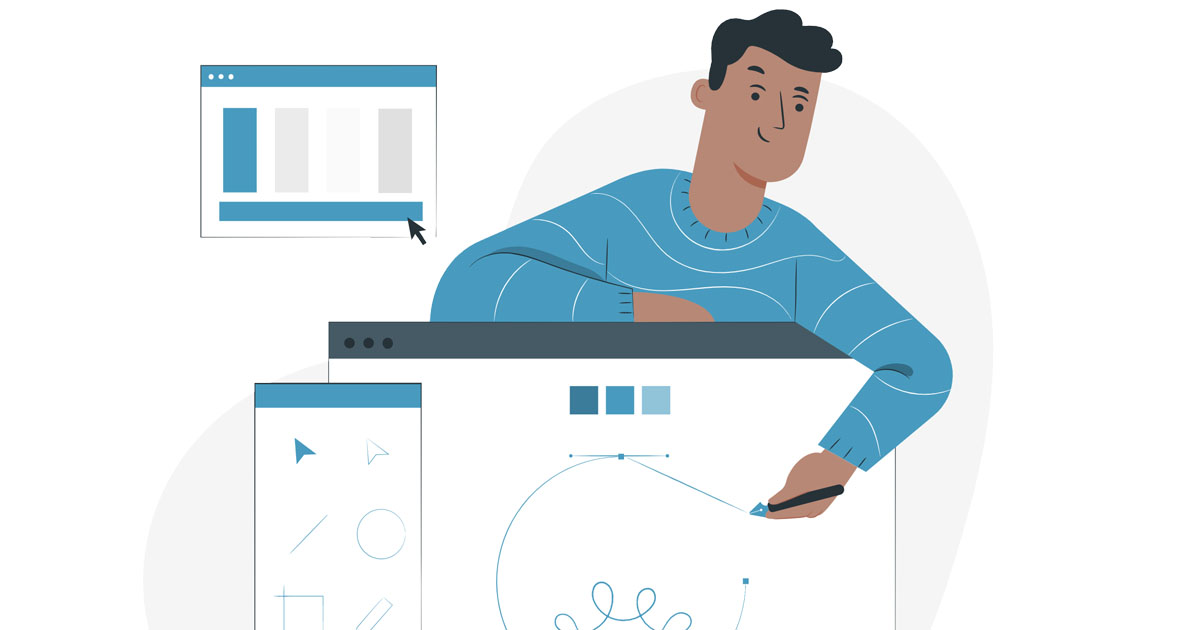 It's clear we need reliable tools and behaviours to help us navigate this world. Here are five tips for making better decisions.

There’s a good story about Max Planck, also told by Rolf Dobelli. After he won the Nobel Prize, Planck went around Germany giving the same standard lecture on quantum mechanics.

Over time, his chauffeur, who travelled everywhere with him, memorised the lecture and said, “Would you mind, Professor Planck, because it’s so boring to stay in our routine, if I gave the next lecture in Munich and you just sat in the front row wearing my chauffeur’s hat? Nobody will know the difference.”

Planck said, “Why not?” And the chauffeur got up and gave this long lecture on quantum mechanics. But, at the end of the lecture a physics professor stood up and asked a tricky question.

But the chauffeur kept his cool and said, “Well I’m surprised that in an advanced city like Munich I get such an elementary question."

"In fact it’s so simple I’m going to ask my chauffeur to reply.”

This story shows that surface knowledge can only get you so far.

When you're looking for reliable sources, those with more than just surface knowledge are likely to have a far deeper - and more reliable - picture of the topic at hand. So pick sources that have a good amount of credibility, where the author has spent considerable time and effort to understand and become an authority on their topic. Don't rely on someone who has spent 30 minutes looking things up on Google.

Also make sure you vary your sources. Don't read the same newspaper every day - newspapers are well known for their political bias. Don't rely solely on your Facebook, Twitter or LinkedIn feeds - these are highly curated, created by sophisticated algorithms to only serve up content that you will like and agree with. Look for alternative viewpoints to gain a balanced, unbiased view of a topic.

First, deconstruct: when you’re trying to make sense of something, or to solve a problem, one of the most effective things you can do is to break it down into smaller parts.

Some years ago I was buying a new car, and kept going around in circles as I read reviews and watched videos to help me choose. I was varying my sources to make sure I wasn't listening to biased opinions, but there were so many components to consider - reliability, driving experience, interior features, price... all this information was much easier to make sense of once I decided to break it down so I was considering each element separately.

I was then able to analyse the reviews more clearly, and could start to prioritise which element was most important to me - the interior features - and went on to choose what I thought was the best car in that category.

Other ways of doing this: with a tricky book, stop at the end of each chapter and make sure you understand each concept before moving on. Break a tricky decision down into a list of pros and cons. Find a colleague to dissect a tricky concept with.

3. Know What You Know

Often attributed to super-investor Warren Buffet, the Circle of Competence is a useful model to help us understand where we might be attempting to make decisions outside our comfort zone.

Simply put: you're more capable of making sound decisions around topics and concepts where you have experience and knowledge. Try and make decisions on things you don't know much about, and you can quickly come unstuck.

“If you want to be the best tennis player in the world, you may start out trying and soon find that it’s hopeless—that other people blow right by you. However, if you want to become the best plumbing contractor in Bemidji, that is probably doable by two-thirds of you. It takes a will. It takes intelligence. But after a while, you’d gradually know all about the plumbing business in Bemidji and master the art. That is an attainable objective, given enough discipline. And people who could never win a chess tournament or stand in center court in a respectable tennis tournament can rise quite high in life by slowly developing a circle of competence—which results partly from what they were born with and partly from what they slowly develop through work."

(Bemidji is a small town in Minnesota).

We are subject to biases and heuristics all the time when trying to make decisions. We should make efforts to fight these by taking steps to view things objectively.

Many orchestras invite potential musicians to try out by performing behind a screen. These "blind auditions" help reduce bias. In the 1970s the top five orchestras in the US had fewer than 5% women. Hiring was based on an old boys’ network and was discriminatory. Today, since using blind auditions, women account for up to 30% of orchestra musicians.

Have you ever heard the phrase ‘first impressions last’? It’s true, and it’s called the Primacy Effect. We tend to be influenced the most by the first things we notice about something.

The opposite of that is the Recency Effect, where we recall the latest information better. This has been proven to be true in competitions like the Eurovision Contest, where judges are more likely to give higher marks to competitors who performed last.

To overcome biases and heuristics like these, take the time to outline everything without focusing on information that was just presented at the beginning, or the end, or in a way that benefits a particular audience.

Ask others to help you look at things objectively by picking holes in your arguments and decisions, and by considering a range of viewpoints.

Technology, globalisation, mobility, competition and other factors mean that business moves faster and more unpredictably than just a few years ago.

As a result we can become unsure of our actions, anxious about decisions. Often this causes people and businesses to freeze.

There’s a lot of uncertainty - people don't have all the information they think they need in order to make the right decision. So the easiest thing is to make no decision.

Imagine you're in a meeting with colleagues, and most of them are highly enthusiastic about an upcoming project. They are keen to press ahead with a number of initiatives they think will make the project a success.

You're not so enthusiastic, and you actually think that several of your colleagues' ideas are a bit far fetched. But, they seem convinced and keen, and you don't want to upset them, so you don’t say anything.

Now this probably won't cause a disaster, but if everyone started thinking and acting like this, there's a danger of Groupthink, where the diversity of thinking in a group is dulled by the pressure to conform and follow a supposed consensus.

Think about how a blind person navigates. They use a white stick - a symbol that shows others that they may need assistance. They use the stick, and their hands, to feel their way around. They also use their other senses as much as possible - for example they listen out for signals that might tell them where they are.

But most importantly, they don't stand still. They move tentatively and carefully, but purposefully - and course correct if it turns out they are heading in the wrong direction.

We can do similar things - highlighting to others that we are operating towards the edges of our circle of competence and asking for help, or using other methods of gathering information, or taking small but purposeful steps towards our goal - staying flexible and changing course if we need to.

Deciding your immediate, medium and long-term strategy depends on many elements: your business capabilities, the markets you operate in, customer needs, your competitive advantage - and more.
Learn more 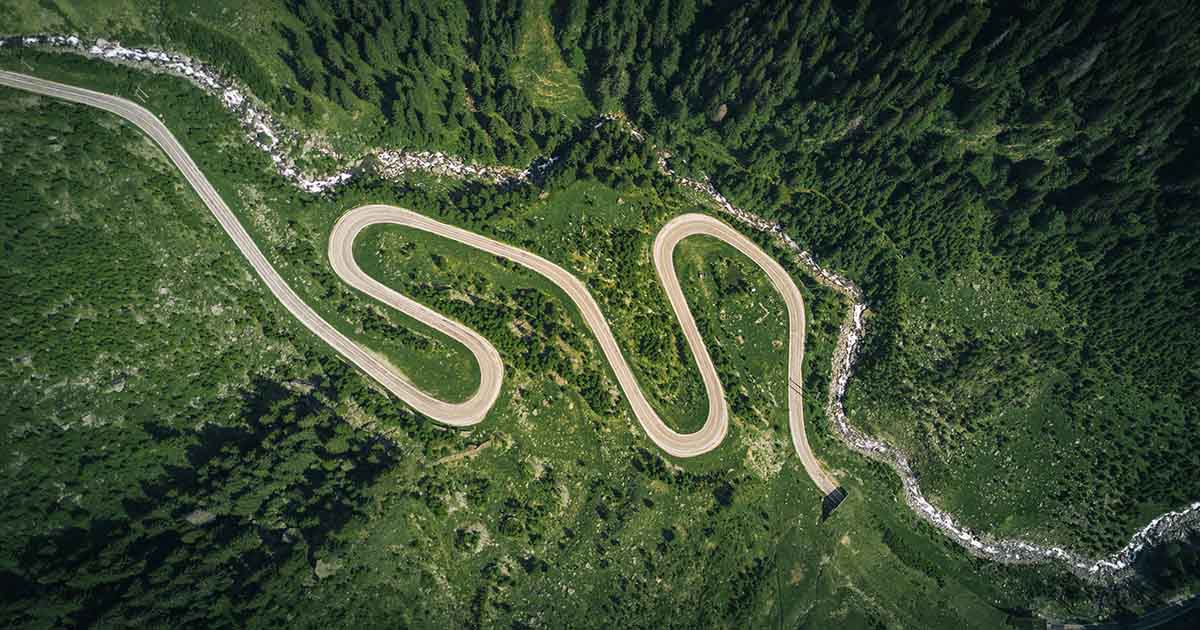 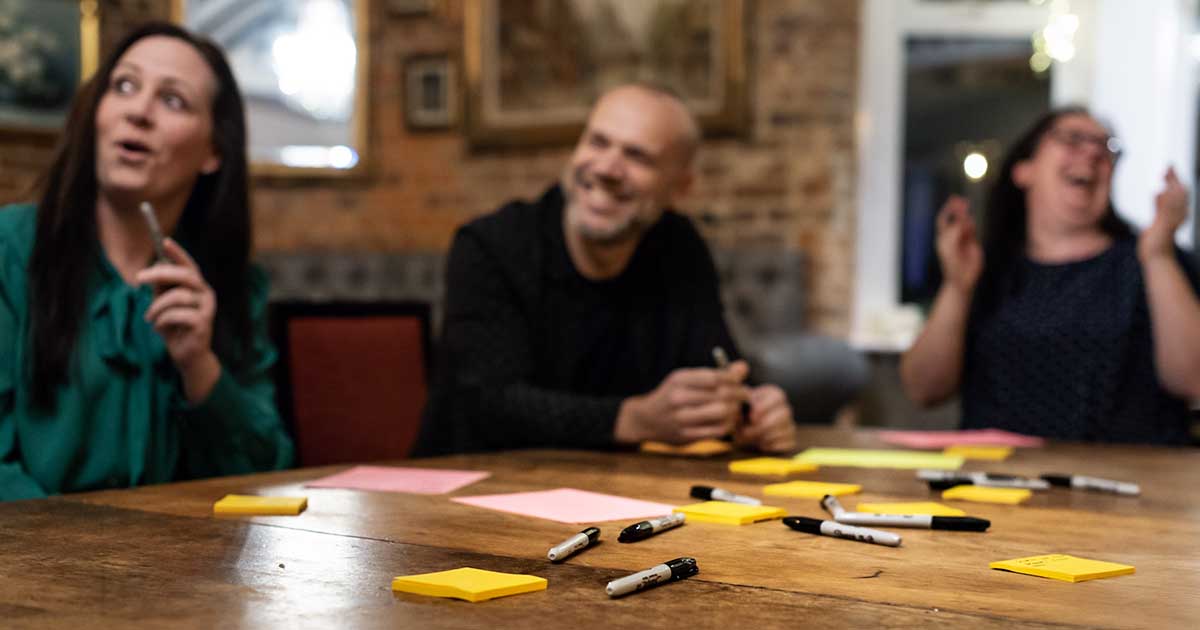 This toolkit will help you run a great team offsite - with in person and virtual options - to get your team members working effectively together. 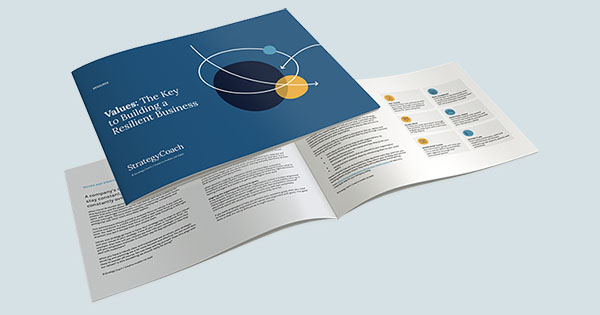 Corporate values form an important element of your company’s culture, acting as the belief system that helps your employees make decisions and take action. 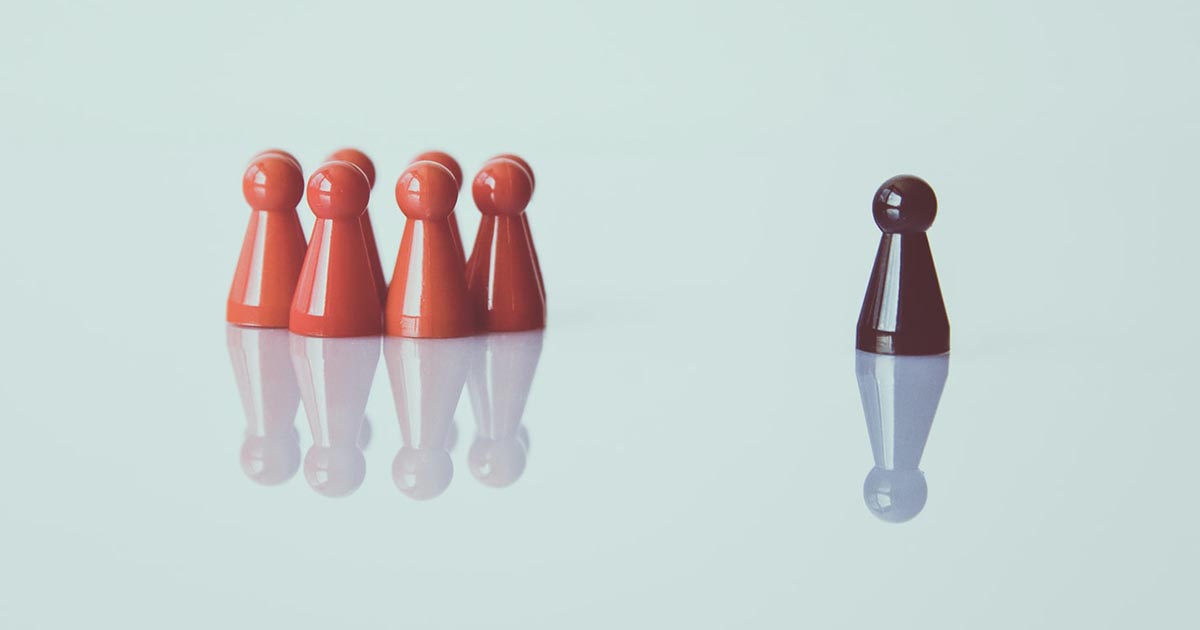 How to develop innovation skills in your leadership team

They have the power to create innovative organisations, but most senior leaders struggle to develop innovation skills. And this is a real problem for business.

The road to better outcomes starts with understanding some of the problems we have with decision making.